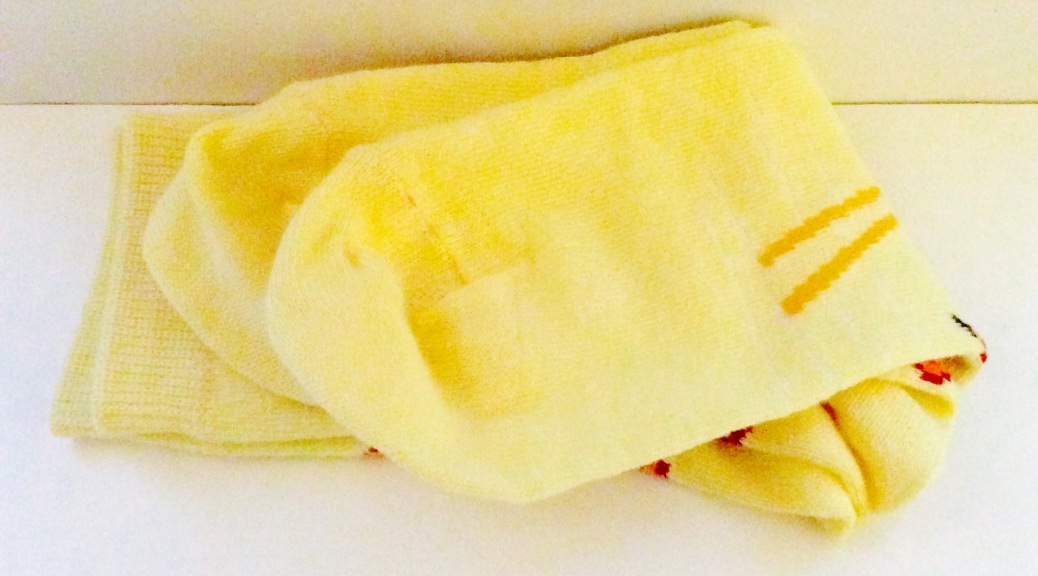 By day four of my hospitalization, things were going smoothly.  Competent nurses were helping me.  I was receiving the medications and IVIG transfusions needed to treat my disease, Myasthenia Gravis.  I was looking forward to going home soon, following my last transfusion.

The evening nurse, who identified herself as the charge nurse, disconnected my finished transfusion.  I reached for my blue slippers. I brought these slippers from home and I have been wearing them daily when up.  I wanted to walk to the bathroom now that I was free from my IV pole for a while.

The nurse said that my slippers should be yellow.  I gave her a befuddled look.  She repeated that it was important for me to wear yellow slippers.  I responded with a weak giggle.  I mistakenly assumed that she was making a joke that I didn’t understand.  After I giggled, she said, “Didn’t THEY bring you a pair of yellow footies?”.  I shook my head in a “no” motion.  She elaborated that I was on fall precautions.  She explained that I was to wear yellow footies at all times, so all hospital staff would keep an eye on me to keep me from falling.  She left the room, saying that she would get me some yellow footies right away because THEY did not give me yellow footies.

I kept my giggles to myself as I read the board on my wall.  It said, “Up At Lib”.  I recalled other staff showing me how to unplug my IV when I wanted to get up.  When this nurse returned, I offered no resistance to accepting a new pair of yellow footies.  However she did not bring the yellow slippers.  She said that she told THEM that I was steady and alert, but that THEY insisted I be on ‘fall precautions’ because of my diagnosis and “many factors”.  I don’t know what the many factors were.  Several hours later, the nurse returned to my room.  She looked at my feet and said, “THEY didn’t bring your yellow footies yet ?”  She seemed quite annoyed with THEM.  I simply said, “No”.  Footies were never mentioned again and I did not receive any.

Day five arrived.  My care was excellent.  At 11pm I slumbered into sleep, knowing that I would be going home the next evening. Each night in the hospital, I had turned out my lights and closed my door because of the bright lights and noise in the hall.  I followed my routine on my last night here.  At midnight, someone opened my door widely and turned my lights on.  Of course, this woke me up.  I decided this person had forgotten their blood pressure cuff, or meds.  I waited for about an hour, unable to sleep because of the light and noise.  I decided to get up, turn off my lights, and close my door again.  As I put my feet over the side of the bed, piercing loud alarms began to ring repetitively .  I walked to the hall and asked the CNA why my room was making noises in the middle of the night.  The CNA said that the nursing supervisor had come through, opened my door, put my lights on, and activated a bed alarm because she wanted me to be on Fall Precautions.  As the CNA said, “nursing supervisor”, she seemed quite intimidated.  I stressed that I had been up without precautions all week.

I called for my nurse, who shook his head and said, “The supervisor did this”?  He turned off alarms and he apologized for the supervisor’s disruption.  I was so grateful for his common sense.  I again read the board on my wall that said,”Up At Lib”.  Following this commotion, it took quite a while to return to sleep.

The next day I was exhausted.  My doctor said he would be talking to the supervisor about  her behavior. This was not helpful to me, but perhaps a future patient will be spared sleep deprivation.  My discharge day had arrived.  I would be going home in the evening after my last transfusion was completed.  On this last day, yellow footies were not mentioned by anyone.

On day two in the hospital, I woke up feeling relieved that last night’s irresponsible nurse had said that she would not be here today.  Actually, she never returned.  Today’s nurse was wonderful.  She was efficient, kind, smart, and helpful.  Yet her hands were somewhat tied by mistakes that had been made he night before.  I was patient when my morning medicine was late.  I am aware that it can take some time to get things rolling along for a new patient.  When I finally put my call light on, my nurse looked baffled.  She stated that the night nurse had not put through my admitting orders.  This nurse did not know about my med order. In addition to my doctor’s orders,  I had arrived with a list of my meds, doses, and frequencies.

This day nurse worked hard to contact the pharmacy and to fix what the previous nurse had neglected.  However, this meant that I missed my 7pm, 8 am, & 12 pm doses of Mestinon.  This is an oral medication that has helped me for these past two years, as I cope with Myasthenia Gravis, an autoimmune disease that effects all my voluntary muscles.  On my own, I have managed not to miss any doses, prior to today.  This really good nurse got my Immunoglobulin transfusions flowing without further pain or bruises. The night nurse was also great.  She helped me feel safe and cared for while in the hospital, quite a contrast to the previous day.  I had no idea what was going to happen the next day.  My doctor was angry about my missed doses.  He talked with me about how he hated to raise his voice to staff, but it had been needed.  I appreciated his advocacy.

The events of the morning seemed routine on day three.  My oral meds were on time. Breakfast was tasty.  My  nurse was friendly.  Mid morning, I asked my nurse when she would be starting my IVIG.  She responded by saying that I could not have it until 10pm.  I explained that the only reason for this hospitalization was to receive these transfusions each day.  She shook computer print outs at me to prove she was right.  I explained the importance of my treatment.  I stated that her papers were mistaken.  Four times, she said, “Don’t cry”.  This baffled me because my emotions were nowhere near tears. I was assertive, as I asked for my treatment.  Without explanation, at 2 pm she started by transfusion, rather than holding it until 10pm, as she said that she would.

I was enjoying an afternoon visit with my son.  At 4:30pm, I put on my call light for my 4pm Mestinon.  C NA’s responded, but my nurse did not appear until 5:10pm.  She announced that she had to pass all her 5pm meds first.  She would then bring my pills.  My son said, “She will bring your 4pm medicine after she passes her 5pm meds to other patients”?   I continued to use my call light.  I told others what I needed.  One half hour later, she returned and announced that I could not have my 4pm dosage until 7pm. Again she waved her papers at me as proof that I could not have the medicine that my doctor ordered for me.  As I explained  the importance of my medicine,  she said “Don’t Cry”.  I explained that my voice is weak and raspy for the past two years because by breathing muscles are not strong enough to move my voice box, not because I am crying.  My son reminded the nurse that I had told her earlier that my impaired speech is a symptom, due to my disease, not due to crying.  My husband said to this nurse, “Look at her, do you see any tears?.  I asked my nurse to call the doctor.  She scolded me and said the doctor doesn’t make the decisions: the pharmacy and nurses do.  I felt that staff forgot that I was sick and weak.

At this point, we could hear my son speaking to my doctor’s answering service.  He asked to be called back because of the poor care I was receiving.  He asked the nurse if she would like her mother to be treated the way that I was being treated.  She looked sad and she said,”No”.  “Well, this is my Mother and I don’t like how you are treating her. Do you say ‘Don’t cry’ to all your patients just to placate and shut them up? She is not crying.”

The phone in my room rang.  It was my doctor,  He apologized to me for the mistakes of the pharmacy and nurse.  He stated that if there were any more late meds, I should call him directly  He then spoke firmly with the nurse.  Arrangements were  made for meds from home to be brought to me so that I would  self administer from this point on.

This nurse left and I never saw her again.  The night nurses for future shifts were good.  By this, I mean that they did their job and for that I was grateful.  I had the same day nurse for the remainder of my stay.  My IVIG transfusions were started promptly at 7 AM on days four, five, and six.  My medicines arrived on time.  I was discharged on the evening of day six.  I was grateful for the kind, accurate care that I received during my last few days. I felt exhausted and relieved to have survived the stress and mistakes of the hospital.

It is two weeks since my treatment.  I have been feeling quite sick. This is a common side effect of the IVIG transfusions. The benefits will be here soon and I will feel this experience was worth it.

All of these experiences have been reported to proper authorities.  I hope education will be provided to the staff who need it and that praise will be given to those who fixed mistakes.  I have been able to forgive and move on .  This does not mean that the mistreatment was O.K.  It does not mean that I was not angry and scared.   It means that I can let go of it in the healing environment that I have created at home.

There will be future articles about this hospital stay.  They will about less extreme situations. Actually,  one of the scenarios is quite funny.  I also plan to write about what I’ve learned and how I hope to use it to help others.